Al-Qaeda & Ostriches: Axis of the Asinine 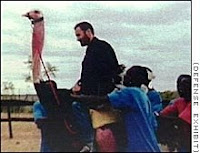 My musings on ostriches and WMD attracted an interesting comment. After observing that both North Korea and Iran were seeking WMD and were I posted this picture and writing

Here is a picture of Osama bin Laden aide-de-camp Wadih el-Hage riding an ostrich during an al-Qaeda foray into flightless bird wrangling.

This is one of the most ludicrous, asinine thing I've read about him yet. It wasn't "during an al-Qaeda foray into flightless bird wrangling." It was a family outing. We each rode an ostrich, one at a time, while the owners (also pictured) held onto them, much like one holds the reigns on a horse, though with ostriches, there are no reigns to be held, only feathers. This place is an ostrich farm. Please don't speak about things of which you have (very) limited knowledge. Also, in the future, please draw a solid line between perceived facts and your own opinions.

I try to respond to comments on my blog, usually with a comment of my own. But this deserves a bit more time.

First point: this is one of the "most ludicrous, asinine thing[s]" the commenter has read about Wadih el-Hage? Really? I'm sure if you poke around the blogosphere, this is pretty low-rent stuff. And if not, bloggers have not been doing their job!

Second point: that being said, the post is a bit ludicrous, and arguably asinine. It is clearly intended as a HUMOR piece (granted it may not be terribly funny). It was not meant to be taken seriously. Al-Qaeda and its ilk, continue to demonstrate a very serious humor deficit. This may be at the core of the "clash of civilizations." One side can't seem to take a joke... ever.

Third point: the comment also claims to have been present at the ostrich ride and that I am completely wrong about it and takes me to task for speaking "about things of which you [that is me] have (very) limited knowledge." Sure, ok. I was not there, I would never claim to be. However, I did not make any of this up whole cloth. The picture above was submitted as evidence by the defense in Wadih el-Hage's trial. The defense was arguing that el-Hage was a businessman who was looking to deal in various commodities, including apparently ostrich eggs (which I guess is different from ostrich wrangling - so I did engage in hyperbole - see point two above). The transcript from the trial is posted here.

Fourth point: perhaps this was in fact a family outing, which the defense attorneys later tried to portray as a business deal. I could not possibly know that. However, I would caution, the prosecuting attorney in the trial was Patrick Fitzgerald. If there is one thing I learned from Scooter Libby's trial it is not to fart around with evidentiary matters when Patrick Fitzgerald is the prosecutor.

Fifth point: The comment is a smokescreen or red herring. There is some inherent connection between ostrich farming and WMD. I am getting too close to the truth and the Axis of Ostriches is trying to sidetrack me. They are using subtle tactics of misdirection learned from studying Sun-Tzu.
Posted by Aaron Mannes at 10:22 PM

Email ThisBlogThis!Share to TwitterShare to FacebookShare to Pinterest
Labels: animals

Your previous article (with the terrible - and clearly not yet acquired, on my part - sense of humor) had been the first time I'd visited your blog. I tend to check out what wild new rumors are circulating or whether or not bloggers have been keeping up with current events regarding the case. I may have exaggerated about your piece being one, but with everything I've read, I've never heard something as simple as an ostrich ride (pretend its a pony, if it'll help you see my point) turned into some sort of war crime. Again, as I informed you, I was not aware of your sarcastic talents (=P) and hence, I feel no further need to continue this discussion, if it may even be called that. But thank you for devoting a whole post on me. I'm flattered.