The Washington Times is one of the few major media outlets that pays much attention to the question of Puerto Rican statehood. Today’s editorial catches their general slant as opposing it – although they have run commentaries in the past arguing for new policies towards the island colony.

This particular piece argues that the plurality, but not the majority, of Puerto Ricans prefer the current commonwealth status but that the process being put in place will slant the decision-making towards statehood.

The surface explanation for this editorial is that Puerto Rico will be a strong Democratic state, adding a pair on the Democratic side of the aisle in the Senate and it certainly no secret that the Washington Times slants right. The editorial also notes that as a bi-lingual territory Puerto Rico as a state would force the issue in the U.S. and bilingual nationhood is not a good direction for the U.S. to take – our language should unite us.

The merit of that argument aside, there is another aspect to this problem. The tiny also-ran in Puerto Rican politics are the independentistas. It has been a strong enough sentiment to inspire some serious terrorism including a failed assassination attempt against President Truman and bombings in NYC. (The U.S. government has done some violence to the Puerto Ricans as well.) Now, the Puerto Rican independence movements have been infiltrated and are pretty marginal. But there is a certain gut appeal for independence among many Puerto Ricans. As one Puerto Rican journalist I met put it, “On Saturday night at the bar everyone is for independence. But when they wake up Sunday morning they come to the senses.”

Puerto Rico is a poor island with high unemployment and deficient social services. It is either the wealthiest country in Latin America or the poorest state in the union. Statehood has been the Holy Grail for an important faction of Puerto Rican politics. But will statehood reduce the island’s structural problems? Currently, in exchange for not having representation in Washington, Puerto Ricans are exempt from federal taxes (no taxation without representation.)

Whatever federal benefits their representatives in Washington can obtain – they will probably not be sufficient to counterbalance having to now pay federal taxes.

Is it inconceivable that, once Statehood is reached, the independentistas will be able to shout “I told you so!” as the island’s fundamental problems remain? In those circumstances, could a new secessionist movement gain traction?

This may seem far-fetched. Perhaps Puerto Rico’s sentiments for independence are not that great and will not gain much favor. But the United States fought a long, bloody war over whether or not states can leave the union – the issue is like Pandora’s Box and is best left closed.

That being said, Puerto Rico’s situation is unfair. But in life and politics perfect justice is rarely obtainable. The Puerto Ricans do not wish for independence and statehood isn’t in the cards. But there is some compensation. The tax freedom is a good example as is Puerto Rico’s Olympic Committee. Under the current status Puerto Rico can enjoy the fun part of nationhood, while avoiding the less pleasant aspects. There are worse situations.
Posted by Aaron Mannes at 4:28 PM No comments:

As a PhD student at the University of Maryland’s School of Public Policy, I have to take a comprehensive exam on normative issues. The first books on the reading list are selections from the classics, which I studied at St. John’s – Plato, Aristotle, Locke, Hobbes and Rousseau. While most of the moral and political philosophy we are required to read is “modern” (i.e. written in the last two centuries and thus not of interest to Johnnies) I am thrilled to be spending time with some old friends.

Beastly to the Books
When I studied The Republic at St. John’s College there was a guy in the class who always sought to tear down the books – trying to pick them apart and expose them as unserious. This was not the St. John’s way, and I feuded a bit with him. I took to calling him Thrasymachus after a character in The Republic who assails Socrates “like a wild beast” insisting that injustice is the true justice in book 1. (Things really get rolling in book 2 when Glaucon makes the same argument more calmly asking in effect if justice is a virtue or is it just fear of getting caught and that the truly great men are those who don’t get caught. The question of how to instill a love for justice is fundamental to all societies and at the core of this most profound book.)

I regret deeply that my in-class frustration with Thrasymachus led to a frayed relationship out of class. I should have taken to heart the words of a wiser classmate who observed that Thrasymachus was so passionate because he wanted so deeply to understand truth and justice. If you are out there and recognize yourself and happen to stumble on this shoot me a note. Mea culpa.

A Kiss is but a Kiss
Socrates explains that in his perfect city (which is a thought experiment not a political action plan) after the army wins a battle the returning soldiers will be free to kiss anyone in the city.

Thrasymachus (in our class not in the book) saw a loose thread to pull on and observed, “Is that a euphemism or what?” 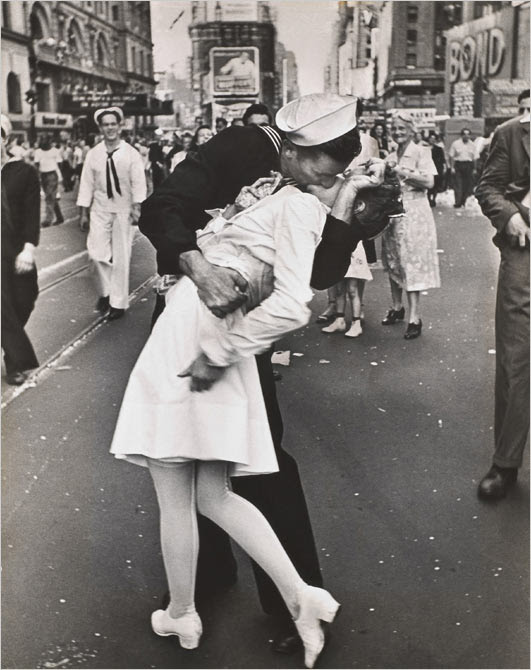 There were times when I deftly responded to this sort of statement. This was not one of them, because almost everyone in class sort of agreed that this was the case and none of us had any particular thoughts on dealing with it. What I wished I had said was this:

Your interpretation is the obvious one and I don’t have a response, only this thought. If someone says aloud “World War II” a pair of images leap into my mind: the marines raising the flag at Iwo Jima and the sailor kissing the nurse in Times Square on V-J day. That makes me think something else is going on here. I don’t know what, but I give Plato the benefit of the doubt - he doesn’t deal in cheap euphemisms.

As Time Goes By
Now, years later, I think I have some idea what Plato was talking about – maybe. Since studying Middle Eastern politics I have become interested in the overwhelming importance of clans in the region’s societies. One feature of many clan societies (and particularly those of the Middle East) are the restrictions on the movements and behavior of women. Clans are based on patrilineal heritage and any question that a man’s male ancestor is in doubt can undermine the web of loyalties underpinning this system – the family honor. Hence, the requirements that women always be in the company of male relatives in public.

Ancient Greece also had some elements of this system, laws varied by the movement of women was frequently restricted. In his proposal, perhaps Socrates was attempting to reinforce loyalty to the polis as opposed to clan-lineage loyalties and build the ethos of the polis as a voluntary community.

As it happens, this explanation (which seems plausible but requires more research) would not have flown in seminar. At St. John’s we tried to focus exclusively on the books themselves and not their historical context.
Posted by Aaron Mannes at 11:41 PM No comments: