Every summer brings a host of military anniversaries. Tomorrow is the centenary of the Somme, that vast, tragic battle in which modern machinery devoured Romantic chivalry by the tens of thousands.

But there is a smaller engagement I remember in late June. Operation Epsom (or the First Battle of the Odon), in which my favorite Scottish unit (the Argyll and Sutherland Highlanders) went head to head with some of the toughest formations of the Wehrmacht.

Background: or why I even have a favorite Scottish regiment

I’ve written that I have a certain fondness for the Argyll & Sutherland Highlanders. They are a storied unit that has fought around the world with bravery and distinction. They faced the Americans under Andrew Jackson at the Battle of New Orleans and were the famed “Thin Red Line” holding off the Russians at Balaclava.

Why I like the Argylls is a bit more complicated, and starts about a quarter-century ago. I'd had a fondness for things Scottish. On a family trip to the UK I absorbed a Holiday History of Scotland. This inspired me to write a short story about MacBeth in which he was a reforming liberal and practical politician.  I interspersed it with quotations from Machiavelli's The Prince and cleverly titled it The Scottish Prince.

I was taking a class in college on the history of the Bible, taught by a wonderful curmudgeon who insisted we learn actual dates. I went to a school filled with very creative people who found this almost as overwhelming as algebra. I, on the other hand loved history and had been through Hebrew school, so this material was not unfamiliar.  I didn't really need to study for the exam, and when I took it, I finished in about 10 minutes and blew the curve.  (This was unique, I am generally a terrible student.) But I helped organize and lead a study group (there might have been a young woman I was enamored with, I really don’t remember).

We stayed up all night studying, I had everyone make timelines. It was around Passover/Easter – The Ten Commandments was on TV in the background. Heading home through Brookline, someone had left a painting of redcoats with kilts out for the trash. I liked it. It stayed with me, through several moves and getting married. I always found a place for it on my wall. 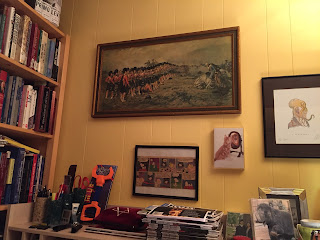 Fast forward about fifteen years. I was at a conference in Edinburgh, Scotland. My wife was with me and we were doing some sightseeing. (I could happily tour every castle and battlefield in Scotland, followed by fish and chips at a pub. Is heaven like Scotland on a sunny day? I hope so.)

At Stirling Castle, we had done the tour and I was wandering around when I heard my wife calling for me. There it was, my painting. The castle is the home of the regimental museum of the Argyll and Sutherland Highlanders. The painting is The Thin Red Line (from the regiment’s stand at Balaclava.)

Operation Epsom: The Argylls at Normandy
So, as I was listening to Keegan’s Six Armies at Normandy, there was a little added thrill that the Argylls were present with the Scottish Division.

Of course, these weren’t really the Argylls. The regular regiment had been captured when Singapore fell. The Argylls of D-Day were originally a Territorial unit, which virtually overnight inherited the weighty traditions and history of their namesake unit.

They were, Keegan writes, “innocents to war inasmuch as Scots can ever be.”

Hearing this, as I drove to and from work, I was worried about their fate and became even more worried as they were deployed in Operation Epsom.

The German plan was to use its Panzer divisions to split the allied forces and crush them. The large force being assembled included Panzer Lehr, the most formidable armored division of the Wehrmacht. If Darth Vader were working for Hitler (an entirely imaginable scenario) Panzer Lehr sounds like his personal strike force. It is a unique quality of the German language to take utterly innocent words and make them sound frightening. Lehr means teaching, Panzer Lehr was the teaching division - which is why they had to be the best, they set the example. So they were pretty bad-ass.

Meanwhile, the British were planning their own offensive to seize strategic ground in preparation for liberating the city of Caen. The Scottish Division led the way, attempting to establish a corridor through which allied troops could move into the critical territory. The Argylls had a lead position and, fighting through German defenses had moved across the Odon River when they Germans counter-attacked. Five Panzer divisions struck the Scottish Division, with the Argylls most exposed and without tanks of their own to counter the Germans.

Over the next five days, Panzer divisions savaged the Scottish division. It paid a high price, 2500 casualties, but was not dislodged. Operation Epsom did not achieve its objective, but in absorbing the counter-attack it had blunted Hitler's strategic reserve and foiled his plan of using his armor to split the allied forces.

In the past, I wrote about a unit’s colors representing its soul - that a military unit has a certain, ineffable quality. In Operation Epsom, the Argylls lived up to their history. Keegan writes:

Unspectacular, muddied, wearisome and intermittently terrifying, it had blunted the assault of one of the most formidable fighting formations in the German army and stood fit to rank with those other small epics of Argyll and Scottish stubbornness, the destruction of the 93rd at the battle of New Orleans and the stand of the 'thin red line' at Balaclava.

Posted by Aaron Mannes at 11:57 PM No comments: