It isn’t a shovel, it’s an entrenching system and I really needed it.

A quarter century ago, when I was an usher at a movie theater, I saw “A River Runs Through It.” Based on autobiographical stories by Norman MacLean, the film ends with the author as an old man fly-fishing in a river and thinking over his life, the people he has loved, and their places in the great river of time. The film ends with him intoning, “I am haunted by waters.”

I was haunted by the soundtrack and every day since I first heard it I have been humming it to myself. Just a few weeks ago it finally occurred to me to buy it.

What does this have to do with buying a portable shovel? I mean entrenching system?

I will turn forty-seven years old in a few months. By no means is my life over, there is a lot still to come. Some wonderful things. But outside of rarefied roles like Supreme Court Justice or Pope, I am not young anymore.

If life is a sort of vacation from something else – and sometimes I believe it is – I don’t need to start packing yet. But if there is something I really want to do before heading home, I should probably get to it sooner rather than later.

We live for possibilities and I still have many. But there are also limitations. There are so many things that I know will not happen now. There just won’t be time or I don’t really have the drive or talent. This is a hard thing to know, but in time the bigger things become smaller and the smaller things become bigger.

I’m not the old man at the end of the movie yet, but he is not some distant relative. I greet him as a friend. So I bought a shovel – I mean an entrenching system.

I am not one to take up fly-fishing in a beautiful Montana canyon. But I live close to a creek. An ancient one that, in the winter when the trees are bare and you look, you can see the sinews of the land and how over time this little trickle of water has gouged the earth.

After a heavy rain this little creek runs hard and deep, show its great power – moving swiftly enough that it is plain even to us with our lives of mere decades.

After one storm, I saw a spot where the water crashed over rocks clogged with leaves. I watched for a long while as the water pressed forward, colliding, forming eddies. I could have watched forever.

But instead, with a stick I began clearing the debris. And it brought me such a simple joy to ease the way of the waters. 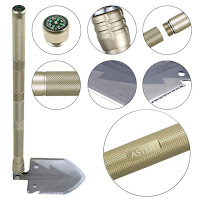 As days went by, I returned and I found more and more places where I could unblock the water. But I needed tools. Sometimes there were small shoals where water gathered and sat, stagnant.

So I bought a little shovel, rather an entrenching system and I headed to
the stream.

My wife observed that there is no shortage of chores around the house. A yard to clear, gutters to clean. She’s right of course. My work clearing the stream has no purpose. The waters have been going where they are supposed to go since the earth formed and will do so until it is no more. My small efforts amount to nothing. 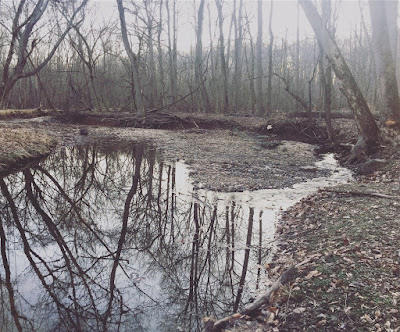 But whenever I have a few moments, I take my shovel, I mean my entrenching system and go to the creek. My headphones stream the soundtrack to “A River Runs Through It,” though sometimes I take them off to hear the waters murmur. And for a little while I touch something so much greater than myself and my tiny cares.

I am haunted by waters.
Posted by Aaron Mannes at 11:21 PM No comments: