With the anniversary last month of Pearl Harbor and the horrible attacks in Paris and San Bernadino, the comparisons between this generation and the generation that fought World War II (my grandfather's generation) have been made - they have not been flattering to the young people of today. And there is the broader question of national purpose - how effectively the United States mobilized to defeat the twin threats of Nazism and Imperial Japan in comparison to our muddled response to ISIS.

War of No Ideas
Also, another area where we clearly aren't serious is public diplomacy/strategic communications. Public diplomacy is not easy, nor is it a panacea. Every think tank talk includes a call for "winning the war of ideas" but no one seems to have a clue how to do this. Nonetheless, after 15 years one would hope that at least the institutions would be established and funding be in place. Unfortunately that is not the case.
So, are we serious about ISIS? In some ways, very much so. The President is trying to keep the threat in perspective. While they are grabbing headlines they are not the only or even the most serious problem in the world. A resurgent Russia, the rise of China, Iran, and Pakistan - to say nothing of hard transnational issues. Syria isn't even the only civil war in the region (how about Libya and Yemen.) Serious people do not fly off the handle and go full bore at every single problem that faces them. That approach will win battles, but it may lose the war. We are applying force as appropriate, generating options - but preserving our capabilities in other areas as well. That is quite serious.
Posted by Aaron Mannes at 1:02 AM No comments:

How Do I Like Jo Walton's Among Others? Let me count the ways... 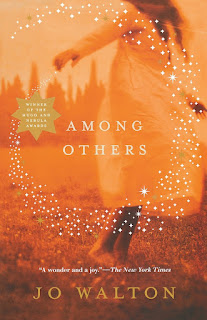 So I recently had the pleasure of listening to Hugo Award Winner, Among Others by Jo Walton. I really enjoyed it - as I write below, it kind of hit the spot for me. It was lyrically written, the narrator's voice was a precocious 15 year-old. All good. But it was more than that. Allow me to elaborate:

My regular readers (should I have any) know that magic has been on my mind lately. I am not big on the supernatural. So I'm not heading into a belief in spirits or elves or crystals. I'm pretty lined up with the rational. And yet...

When I think about the power of our emotions to move us, or bind us in knots and then - even more incredibly our ability to propel these feelings into the world and move others... even centuries later! I lose the ability to write complete sentences.

I enjoy Myers-Briggs tests. I know they have been proven to be fundamentally inaccurate. What they are is modern astrology. Fine, and like astrology, they are fun, and in providing a framework (even a flawed one) - assuming it isn't being used by a charlatan but rather the stranger who takes your life seriously - they are useful. I always came out as an ENTP. I just took one and came out as an ENFP. I'm Extraverted, Intuitive, and Perceiving. That's me. But in the past I came out as a Thinker, who prized and employed reason. Now I'm a Feeler, at least according to a test that took my 8 minutes on the Internet and that I already knew how it worked.

So, I'm thinking about magic. I'm going through stuff (not bad stuff, just stuff). And I happen to listen to a book about magic that frames it in terms that work for me, that clarifies some things.

Years ago I listened to The Lost Painting, about a Caravaggio painting that had been lost, but re-emerged. Somehow, when the painting surfaced in Dublin, at the same time some important scholarly information emerged in Italy that allowed the finders to prove the paintings provenance. Coincidence? Maybe. You could argue that for every instance of great work re-emerging, many are lost. As we enter the era of big data, perhaps data mining will reveal these kinds of finds all the time.

Or maybe, Caravaggio's deep feelings - the feelings that allowed him to paint such masterpieces - were placed into that painting and give it a certain energy. What is a painting? It is a bunch of chemicals applied to a canvas. Yet, the great painters do this in such a way that they can evoke feelings centuries later. How is that not magic? Is it too much to think that this painting, like Smeagol's Ring, could somehow (despite being submerged for eons) force its way out and re-emerge.

That somehow, there are deeper forces at work, patterns, networks of energy below the surface... magic!

Posted by Aaron Mannes at 12:14 AM No comments: