Winning by Losing: US & the World Cup

It was good for Belgium to beat the United States at soccer (or football, as the rest of the world insists on calling it.) Not because a loss to a tiny European country that in population and area is smaller than Pennsylvania will force the United States to really invest in soccer and build a strong program - quite the opposite.

Let the rest of the world have soccer – the United States is the greatest country ever. I mean great in its true sense, great – big – large. We do things on a bigger scale, whatever it may be, than anyone ever has before. We also are, on the whole, pretty good (or at least we try.) We are most certainly not perfect, but I would argue that we are the least bad great power ever. Few would seriously trade American hegemony for the alternatives. We get into trouble when we press the point too far. Unfortunately it is in our national character, our fatal flaw if you will, to do exactly that. The late Robertson Davies, a Canadian novelist, in speaking against NAFTA observed:


…the extravert is one who derives his energy from his contacts with the external world; for him everything lies outside and he moves outward toward it, often without much sensitivity to the response of that toward which he moves…. The extraversion of the United States is easy to see. It assumes that it must dominate, that its political and moral views are superior to all others, and that it is justified in interference with countries it thinks undemocratic, meaning unlike itself. It has also the unhappy extravert characteristic of seeing all evil as exterior to itself, and resistance to that evil as a primary national duty. Americans are generous to a fault…the Americans [are] charming, extraverted, certain of their acceptance everywhere…

(Aaron, you cite a Canadian novelist on international affairs a lot, which is odd, particularly since Davies himself had so little interest in politics which he called “external things: only a fool gives his soul to them.”

Me: True, and that’s kind of the point, Davies was interested in what really mattered and sometimes those things are not subject to traditional analysis, not what truly moves us.)

The point here is that the United States is enormously powerful and rich and – on the whole – a force for good in the world. I'm writing this under an American flag, waving on my front porch - I think the US is awesome.

However, imagine if, in your own life, you had a supremely talented, charming, and wealthy friend. This friend helps you all the time, while also regularly besting you at most things (and perhaps is less than humble about all of it). Might you not resent this friend just a bit (and perhaps the fact that the friend is so generous makes your own resentment grow?) You might begin to suspect your friend’s motives. You might, alternatively, tell your self that your more modest, but well-appointed home is in fact much more comfortable and pleasant than your friend’s rather gaudy mansion. You might convince yourself your friend, for all of his outward success, has no interior life and is not truly happy. You might focus on your friend’s failings.

You will almost certainly gather with other acquaintances and gossip about the overbearing friend – focusing on all of these things and reinforcing your resentments. You might also, REALLY, REALLY enjoy seeing this friend lose or fail at something – especially if it is to you. That’s us and, if we can be objective, we can see why other countries – even ones with which we have innumerable shared interests – might resent us on occasion. 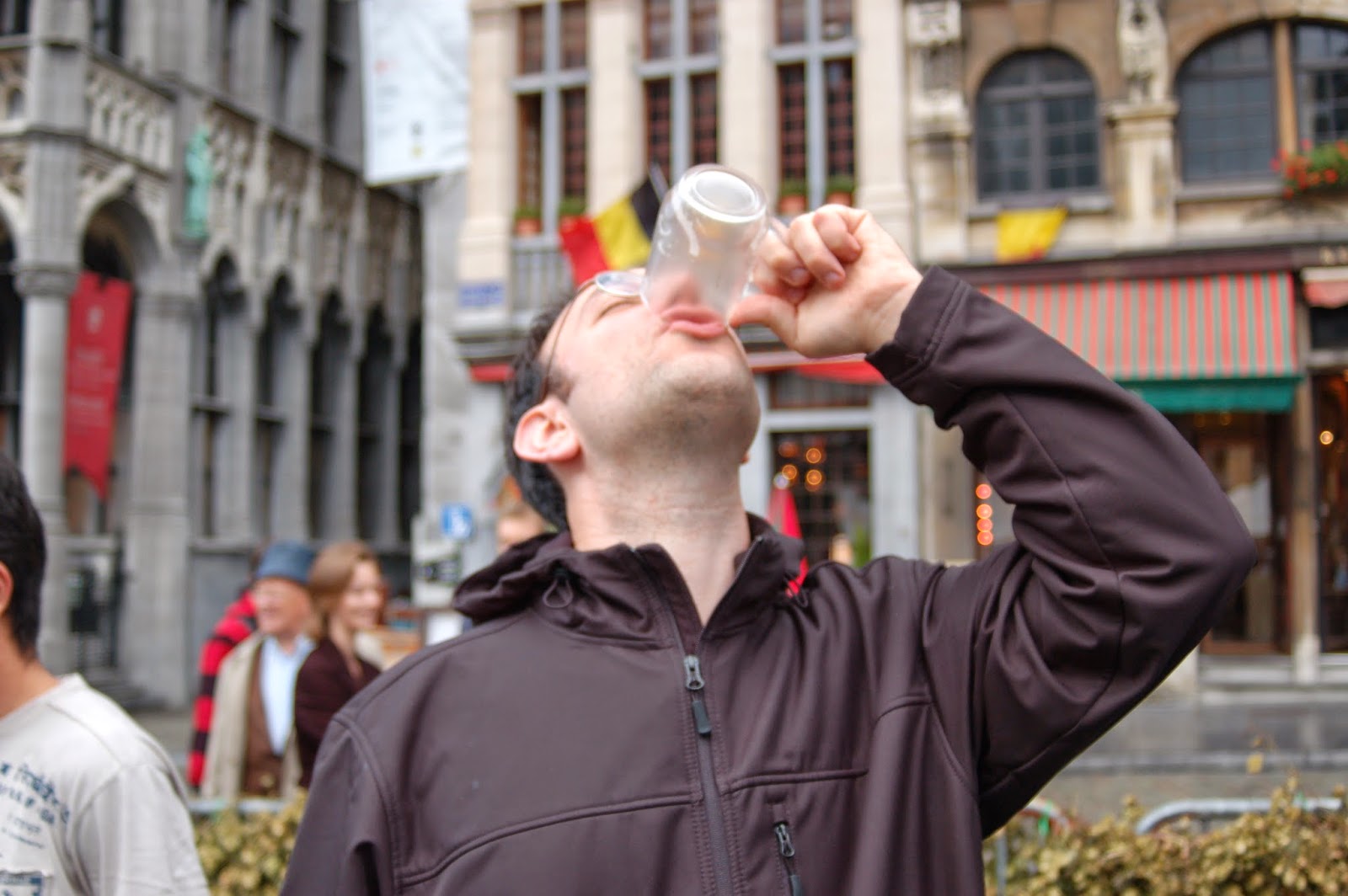 Having some failings and weaknesses makes the US easier to take. In the big picture, losing to Belgium – a small, lovely country with a rich history and complex identity of its own, that also makes fantastic beer and chocolate – is kind of a win.

(That's me at a beer festival in Brussel's beautiful Grand Place - because there is a lot more to life than politics.)
Posted by Aaron Mannes at 7:51 PM No comments: