Tisha B'Av and the Ruins of Rome

As Tisha B'Av winds down, my thoughts return to my recent visit to Rome (and food, Tisha B'Av is a fast day and I'm really hungry.)

I've been meaning to write up my visit, it was wonderful. I saw splendid things, met interesting people, tasted delicious food, and had lots of gelato. But, in the spirit of the day - which is the saddest day in the Jewish calendar, remembering the destruction of the ancient Temple by the Babylonians AND the Romans - this will be more somber. It will expand on my Tisha B'Av post from two years ago.

I love ancient ruins. As a graduate of St. John's College and a general fan of history, antiquity fascinates me. Yet, my visit to the great ruins of Rome, centered around the Forum, was delayed until nearly the end of my trip. Between meetings and tours I had booked, my time with the ruins was limited to my last afternoon. And I took a nap. Still, the Forum is open late, until 730, so when I got up in mid-afternoon I had plenty of time.

The ruins of Rome have a particular fascination for me, because I play a game called Caesar. It is a city-building game - like Sim City - but set in ancient Rome. So I know a bit about Roman architecture and urban development. As I wandered around the city I hummed the music from the game. (FYI - I haven't played the game in years, the ancient laptop I used for it was stolen.)

I had earlier visited the City of Water, a lesser known archaeological site (Rome is crawling with them) in which construction had discovered an an insula (a tenement) that was rebuilt in the 4th century as a luxurious domus. This is exactly what happened in Caesar!!!

Later a walked along the Circus Maximus, the site of the great chariot races. Now it is a big empty field, but in the game, if you built one you were pretty close to winning the game!

A Funny Thing Happened at the Forum
I set off the for Forum, excited thinking I had saved the best for last. But, after stops for gelato and quick looks at the many other ruins, when I arrived at the Forum they were still open but not providing the audioguide. The Forum was closing "soon." The official close time was still hours away...

I downloaded a different audioguide and began exploring. But when I went in one direction I was instructed it was closed as the Forum would be closing soon. I got perturbed, started walking, and found myself on Palatine Hill.

The Forum was the heart of ancient Rome, while Palatine Hill overlooks it. It was the seat of the Imperial Palace. Admission to one grants admission to the other, but once one site is exited, you cannot re-enter it. 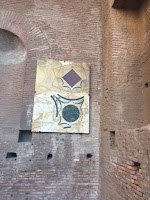 So I explored Palatine Hill. It was mostly remains of brick walls - with terrific views of Rome, the Forum, and the nearby Colosseum. The scale of the Imperial ruins are impressive, but there are only the faintest hints of its past grandeur. A piece of marble column here and a fragment of a mosaic there.

Somewhere around 630-645 (well before 730) I was definitively shooed out. On exiting the site, one comes to the Arch of Titus. Built to commemorate the Emperor Titus' conquest of ancient Palestine it include the image of the Great Menorah from the Holy Temple in Jerusalem being paraded through the streets of Rome. This sacred relic was reduced to war booty.

Just beyond the Forum was the Colosseum. It is a remarkable building. It was closed but I walked around outside. I was a touch disappointed from not really getting to see the Forum. I learned that Titus had build the Colosseum with the spoils taken from Jerusalem. The gladiatorial games in which people fought one another or killed animals are abhorrent to Judaism (and to me).

It brought the day into perspective. Palatine Hill made sense. The palace of the most powerful man in the classical world was, in mere centuries, reduced to piles of bricks. Rome became a swampy backwater for centuries. Yet we - the Jewish people - are still here. This is not celebratory. I am not glad Rome fell, I do not revel in the sufferings of others. Rather it is a reminder of the vast tides of time and history, and of those things that truly keep us afloat.

Posted by Aaron Mannes at 6:53 PM No comments: