I try to affect a mild analytic tone in my writing here (which probably doesn't get me many readers.) But today I can't, I am really mad. On Christmas, The Washington Post ran this story on how the U.S. bureaucracy could not pull together an effective response to Russian information operations.

Here is are two critical clips, but by all means, read the entire article. 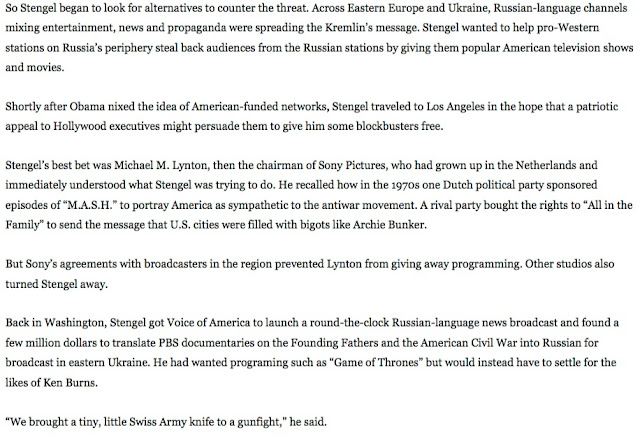 Above, the Under Secretary of State for Public Diplomacy had a creative idea for leveraging the fantastic content generated by the American entertainment industry as a public diplomacy tool to counter the Kremlin. But, the material is already under contract and it just couldn't happen.

Here again, a clever official at State has a plan to use cutting edge social media analytics to build networks to counter Kremlin propaganda networks. Great, but State cannot carry out public diplomacy on the American people, so it couldn't happen.

What made me so angry?
Am I mad at the State Department lawyers who wouldn't permit the project to go ahead? No, they are there for a reason. Our bureaucracies operate under constraints that reflect our values and priorities.

Let me step back.

Since 9/11 I have gone to hundreds of think tank events, public forums, and other events where the great and good explain the world. I've even spoken at a few of them. All of them talked about the need to fight "The War or Ideas" or "Counter the Narrative."

At one, discussing ISIS, about two years ago I said: "I've gone to so many of these events over the past fifteen years ago and everyone says we need to win the war of ideas. But we still haven't really committed to doing anything about it."

The speaker observed that ISIS propaganda works differently from al-Qaeda propaganda, so past efforts aren't effective.

My rejoinder was, "Fair enough, but that's like talking about needing snow tires when we still haven't bought a car!"

The speaker acknowledged my point. It isn't that State was blindsided by Russian propaganda. They were, but that is going to happen. It isn't that we probably shouldn't have dismantled our public diplomacy infrastructure after the fall of the Berlin Wall. Again, we shouldn't have, but we were feeling good about ourselves.

It is that - and I've written about this before - despite talking about it, we still have not established the bureaucratic infrastructure for effective public diplomacy. Given time, work arounds can be developed to bureaucratic constraints. If the U.S. government had really been working these issues (not the individuals - who are trying - but the institutions) then there would have been a range of ideas and capabilities available. They might need to be repurposed from countering radical Islam to countering the Kremlin, but at least there would have been frameworks already established.

Failure of Leadership
Ultimately, to get results investments need to be made. It is that simple. Yes there is political turnover, but plenty of agencies have sufficient resources to build and maintain capabilities regardless of political leadership. DOD maintains a vast range of capabilities regardless of who is in power. If we want effective public diplomacy we need the personnel and the funding to create ongoing, continuing capabilities - sort of like the infrastructure we have for financial sanctions.

We often hear that U.S. public diplomacy has difficulty adapting to new media. Fair enough, but if the resources are there, then they can have people looking over the horizon at what is coming next. If they are completely overwhelmed by their inboxes there is no time. Further, with resources they can break the bureaucratic log-jams. Doing this requires people, to do research, attend meetings, and brainstorm work-arounds.

Maybe we need to re-establish the old U.S. Information Agency, which was so effective in the Cold War, but folded into State when it was over.

A corollary to this is that public diplomacy is a strategic afterthought, off in a corner. That reduces synergies. If public diplomacy is understood as a central, critical element (DIMEC? the C is for communications) other components of the U.S. government can contribute.

I am still pissed that almost a decade ago we deported the brother of Lashkar-e-Taiba chief Hafez Saeed. The brother, a Muslim cleric in Sharon, Massachusetts, desperately wanted to stay in the U.S. and was much loved in his town (the rabbis went to bat for him.) Talk about a potential public diplomacy asset!!! But instead we deported him and he signed on with his brother.

But unless there is real bureaucratic heft behind public diplomacy, other agency prerogatives - such as Justice's desire to convict people - will prevail.

None of this stuff is easy. There are a lot of other priorities. But really, we've had a decade of complaining about this issue and no action.

I'll write about this later, but State has its own basket of fundamental structural problems.

And no real public diplomacy effort is likely in this administration where the entire State Department is being defenestrated, the very concept of diplomacy is not understood, and our president's toxicity is spoiling our world-beating brand.

Posted by Aaron Mannes at 9:36 AM No comments:

Odds of Catastrophe Under the Current Administration

As 2017 comes to an end, much to the surprise of many, the world has not. Well, not yet, there's still a week. One of the things I worry about given our incompetent and neuroses driven president is the potential for stumbling into a really big catastrophe.

Not the tax bill. Yes, it's lousy, but it will not destroy the country or create huge mass suffering and it is reversible. I'm thinking more along the lines of what has happened in Puerto Rico (which is atrocious) happening nationwide. Just something big and abominable - something that makes 9/11 look tiny, like say, a war with North Korea.

We are probably not going to have a war with North Korea
Some knowledgeable people are very, very worried about this possibility. Others might argue that there is a sort of strategy of compellence evolving. Lots of threats and sanctions to force the North Koreans to the negotiating table on our terms (see below). One can see the logic of this strategy, but also recognize that, when deal with a paranoid (rational, but paranoid) regime, there is a tremendous potential for accidents. In international affairs, signaling can be a dicey business. A threat and a move interpreted by Pyongyang as hostile or a move toward pre-emption, and we could end up in a shooting war. And once that kind of thing starts, it will get very bloody very fast.

I don't think that is going to happen. But here's the thing, if the probability very low, it is now low. In the world of intelligence analysis
, words are considered very poor tools for probabilities. It is important to assign number, because what is low probability - 5%, 25%? It matters.

So let's say that overall the probability of war with North Korea was 1%. Could happen, don't worry too much about it. But, with ill-considered rhetoric flying around, perhaps it is up to 10%. That is still very unlikely, but higher than it should be. Stuff that is 10% likely happens and when it is as catastrophic as a nuclear war with North Korea, you really want to keep it as low as possible.

It's the economy stupid
North Korea is not the only - or even the first - nightmare scenario I worry about it. I also worry about the debt ceiling. They keep making temporary deals to raise it. But, if they should fail to make this deal and the U.S. starts defaulting on its debt, that would send unbelievable shockwaves to the global economy. We could plunge the world into an economic meltdown. Now, to be clear, this is also not likely. First, Congress will keep coming to agreements and if they miss a little, there are contingency plans that would buy a little extra time. But, given the administration's incompetence, not just the White House - also the Secretary of Treasury - one can see this happening through miscalculation.

That isn't the only scenario. What about the President, in a fit of pique, ending NAFTA. Besides possibly triggering a huge recession, it could also push Mexico into a serious political instability. Again, not likely - but likelier.

There are probably other scenarios I haven't thought of. Under Bush 43 they had the 1% doctrine, that is if a terrorist threat seemed 1% likely they had to treat it as highly probable. In retrospect, it was a pretty problematic doctrine.

Posted by Aaron Mannes at 10:28 PM No comments: