I have, for years now, been going to physical therapy (PT). Bad shoulders, bad knees, and other parts of me creak. Much of this self-inflicted from years of lifting weights, running, and generally trying to keep this aging meat sack fit and capable.

At the core of physical therapy is the concept that around the large muscles are a number of smaller muscles that support and stabilize them.  Exercising the large muscles may not adequately exercise the little muscles and, when stressed, they become tight and ineffective. This of course can lead to pain elsewhere I now have golfer’s elbow (and I would NEVER play golf). This is partially from not exercising my forearm muscles and partly as a consequence of stresses in my back and shoulders.

My rotator cuff is getting stronger, thank you.

But my recent rounds of PT have made me think about it as a metaphor for other things.

Organizational Perspective
Organizations usually have core functions, but also lots of auxiliary functions. Depending on the organization these auxiliary functions may be given the attention they require, but sometimes not. This is where private sector organizations have a huge advantage over government agencies (on which I have a bit more expertise.) Corporate leaders have a great deal more freedom to deploy resources than their public sector leaders. If a corporate head believes human resources is critical and wants to build a great human resources department that can think strategically about the organization’s needs and future and how to build the human capital to meet them – they can do it. They will ultimately have to justify this to their board of course, but if they can demonstrate that this is important to the revenue line they can earn the necessary support.

(There is a significant argument within organizational studies as to whether private sector firms are in fact better at adapting than public sector agencies. It is also possible that rather, private sector firms can go out of business, so that when one becomes too inefficient to survive it dies. Public sector agencies are almost never eliminated.)

In the government, output is more complicated. It is not simply about making money; it is providing a range of services that cannot be withdrawn. Often the service outputs must be balanced against an enormous range of other values – environment, diversity, transparency etc.

Taxpayers and legislatures really like to fund the tip of the spear – Navy ships, law enforcement officers etc. But supporting the back end: human resources, facilities, IT, and logistics are less exciting. These support functions become like my rotator cuff: cramped and unresponsive – ultimately inhibiting the function of the total limb.

This can be extended on a larger scale. A weightlifting champion friend of mine explained that in the U.S. we emphasize the front muscles (particularly the pectorals on the chest.) The Russians in contrast emphasize the back muscles, the latissimus dorsi and rhomboids. Of course both are essential. Bench presses without rows will lead to a major imbalance. In current terms one can think of the perennial State-Defense wrangling. We build one capacity, but not the other. This ultimately leaves us weaker.

Mind as Muscle
But since I’m sliding into middle age, I’m also thinking a bit about you know, me.

In the Robertson Davies (my favorite author) novel World of Wonders, a carnival fortuneteller explains that everyone who comes to her asks essentially the same thing, “Is this all that life has for me?” 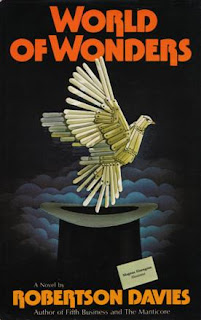 Our minds and psyches are similar to our bodies. They contain capabilities we like to exercise and which grow stronger. But th

ey also have capabilities that are less exercised and become weaker. This is something writers think about a great deal since the core ability is so very hard, but leaves little energy for anything else. So that many of our other capabilities are cramped and it is painful to use them.

Someone who diligently does their personal budget, but does not exercise their imagination may find as they enter middle age a certain lapse. With more time and freedom, and a decline in pleasure from whatever was enjoyed before, imagination is needed more than ever – but is too weak for the task. The alternative is also true, an active imagination but inattention to finances could lead one to face a different set of problems.

Of course, someone might have both of these aspects of life in good stead, but there will always be a deficit and weakness. It is inevitable that some part of the person has been underused and in middle age it is cramped, stressed, and needs exercise.

Wouldn’t it be great if there were some sort of PT for the mind and the soul?
Posted by Aaron Mannes at 3:16 PM No comments:

A lot of terrorism analysis (is lousy, but that's another issue) focuses on groups. I'm not so deeply embedded in following ins and outs that I have so much to say anymore. But I do still think about terrorism conceptually and in particular applying my maxim that counter-terrorism is the practical application of Murphy's Law.

So, with the throat clearing out of the way... 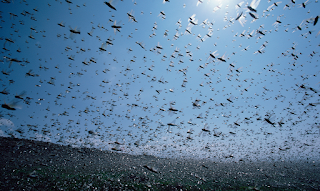 I was at a workshop and a speaker discussed how, with advances in AI, small commercial drones could be fitted with a small amount of explosives and then autonomously target people - one drone/one person. A million of these drones could fit in a cargo container and, on arrival, be set loose on the city devastating it.

It seemed a little sensational to me and the more I thought about it, the less likely it appeared.


Technical Challenges
First, the engineering would be non-trivial. Assuming AI (and in particular computer vision) could fly around a city and identify people as people, there would still be a some pretty tough problems to solve. The drone involved is pretty small, loading it with processors, sensors, and explosives (people over-estimate the ease of engineering explosives) is going to add weight. That will limit range and speed (or you need a bigger drone - and thus more cargo containers - more on why that is an issue below.)

Building a small drone that can find and kill a person is theoretically possible, but not easy. (Here's what DOD is doing with experimental micro-drones). Let's assume this complex engineering feat can be overcome, actually deploying it will present a lot of other difficulties.

Deployment Dilemmas
How is this million swarm of killer drones (WMDrone) to be delivered? We have it in a cargo container, but then what? This very nice (and not so tiny) drone has about 30 minutes of flying time. So, how does this work? Do you just release them from the port authority? Will 30 minutes flying time get them to their targets? Won't people notice the swarm of drones flying around the city? What if people go inside?

Also, will the drones need to be packed during shipping? They have explosives and stuff. Unpacking a million drones is a non-trivial endeavor. It requires time, space, and people.

For this to work, the drones need to start near their targets. They need to be transported, hidden, and prepared. This requires having a logistical base and personnel. The problem is that people do stupid stuff (like get pulled over or really insist on getting their deposit back) and get caught. The more moving parts, the more possibilities for something going wrong.

Let's imagine an adversary has a reliable network of supporters and can secure the necessary safe houses.

Logistics Limitations
So in a quick search the least expensive drone I found was this mini quadcopter. It only flies for five minutes and weighs 2 ounces. It is small enough that large numbers could be transported and hidden. Let's imagine with technology improvements it can have enough of a sensor and explosive to do the job, and a network exists to keep large numbers close to a crowd until the right moment.

The drone costs $20, so for a million of them (plus the additional engineering, tens of thousands of pounds of explosives, testing, transportation, acquiring space, paying personnel) and this becomes a pretty expensive project. Even if money were no object, carrying out a project on this scale would have a pretty significant footprint. There would be thousands of tests to ensure the things worked. There would be a pretty extensive supply chain. How does one order a million drones? Where would the testing take place?

Some of these problems could be overcome, the critical question would be about the adversary.

Capabilities and Motivation
A nation-state could overcome a lot of these challenges. A hundred million dollar project is not inconceivable. The drones could be transported over time through diplomatic pouch to the nation's Embassy and then released when everything was in place.

But would this be an effective tool for advancing national interest? Nations pursue WMD for deterrence, but as we all know from Dr. Strangelove, you cannot deter if the other player does not know you possess the system. The WMDrone could not be revealed, otherwise counter-measures could be deployed, rending the system useless for deterrence.

Maybe a nation would choose to use the WMDrone for a decapitation strike. But it might not work. First, given all of these technical challenges, the things could just fail. Also, given the logistical and operational footprint of the project it could be discovered beforehand. The nation building the WMDrone would need to construct facilities, hire experts, and write analysis papers. The intelligence agencies of its adversaries might notice. Even if they got to deployment, nations tend to spy on the Embassies and diplomatic personnel of their adversaries as well. The costs of being caught carrying out this plot would also be high.

Terrorists might find the WMDrone quite appealing. They would have the desire, but the capability would be lacking. First, it is expensive. Terrorists usually do not have tens of millions of dollars for R&D. Second, because they act clandestinely, extensive testing would be difficult. Also, the mechanics of purchasing and assembling a million of these devices for a secret group would be very, very challenging. Finally, in the actual delivery phase, they would not benefit from an official tolerated infrastructure the way a nation-state would.

Terrorists might find a much smaller deadly drone attack - say a few hundred - possible. But this would not be easy to do. Let's emphasize, right now the technology needed does not exist. Frankly a terrorist group that can get hold of a couple dozen pounds of high quality explosives has much simpler and sure-fire options.
Posted by Aaron Mannes at 6:43 PM 2 comments: