Appointing Donors as Ambassadors: A Colloquy

Recent Obama appointments to Ambassadorial spots around theglobe have blundered through their confirmation hearings.  Naturally, Republicans have leapt on this as a political issue accusing Obama have handing out ambassadorships to big unqualified big donors.  Of course the Republicans do not have exactly a clean record on this – although one Bush 43 donor/diplomat (Dopomat? Diplor?) observed that he was well briefed for his hearings.  This seems more like an operational failure.  Anyone with the chops to be a major campaign fundraiser ought to be able to manage a comfortable diplomatic appointment (they are going to places like Argentina and Norway.)

Why can’t major campaign contributors be banned from diplomatic appointments?

No, we just want to stop the bundlers – the big-time fundraisers - from buying Ambassadorships.

Sure, but the funny thing about campaign finance is that there are always work-arounds.  If our big-time bundler knows what he or she is doing the bundling can occur under someone else’s name, but everyone will know who was really the solicitor.

OK, fine, so the question is why not just rely on the Foreign Service for Ambassadors?

First, for all of the gaffes of the big donor ambassador-candidates, we haven’t seen much evidence that they do any harm.  They get sent somewhere quiet, pleasant and safe.

On the other hand, many distinguished individuals have served capably as Ambassadors to critical countries.  Japan, in particular, has received a steady stream of extremely distinguished elder statesman including former Senate Majority Leader Mike Mansfield, former Vice President Walter Mondale, former Speaker of the House Tom Foley, and now Caroline Kennedy Schlossberg.  Japan is a major ally that often does not get the attention it needs.  Sending such a highly regarded figure is a good way to honor a critical ally in a way that sending even the most senior and experienced FSO cannot.

The appointment of Max Baucus to China fits in that realm as well.  While Baucus admitted that he is no “China expert” as a former U.S. Senator (and chair of the Finance Committee) he brings a great deal of relevant expertise to his new position.  Further, he will have a sense of how things will play back home  - while also honoring Beijing with a distinguished emissary.

Another figure that comes to mind is the great Bob Strauss, a long-time Democrat who served President George H. W. Bush as Ambassador to the Soviet Union and Russia. (And this list is NOT exhaustive.)

The Senate does have the power to reject nominees for Ambassador and if they truly feel an appointment might damage U.S. interests they may do so.  (Jesse Helms blocked Massachusetts Governor William Weld from serving as Ambassador to Mexico – although that might have been personal.)  But the cost of sending some political operatives to quiet tourist havens is small compared to the advantage of the President having the authority to send a trusted, capable ally to nations that are particularly important.
Posted by Aaron Mannes at 10:17 PM No comments:

That would be a fitting, but insufficient epitaph for the renown scholar Barry Rubin, who died earlier this week after a long struggle with cancer.

The stories of Prof. Rubin's facility as a writer a legendary.  A mutual friend recalled a chat with Barry, in the midst of which Rubin declared, "Done."

I remember after drinks and hours of talk at a three-day conference, when I was ready for bed Rubin heading to his room to dash off a few pages for his upcoming book about Syria - he'd learned something new and it couldn't wait.

Rubin was a leading scholar of Middle Eastern politics and history, but even that vast topic couldn't contain his energies.  He wrote about U.S foreign policy, democratization, and model trains (and probably a bunch of other things that I haven't heard about - but this post about an adventure as a civil war re-enactor is simply too wonderful not to share.)

This is a photo of my, all too modest, library of Barry Rubin books (he wrote over three dozen - plus innumerable academic and popular articles).  But - and this just exemplifies his approach to scholarship and sharing - he had made over a dozen of his books are available for free online. 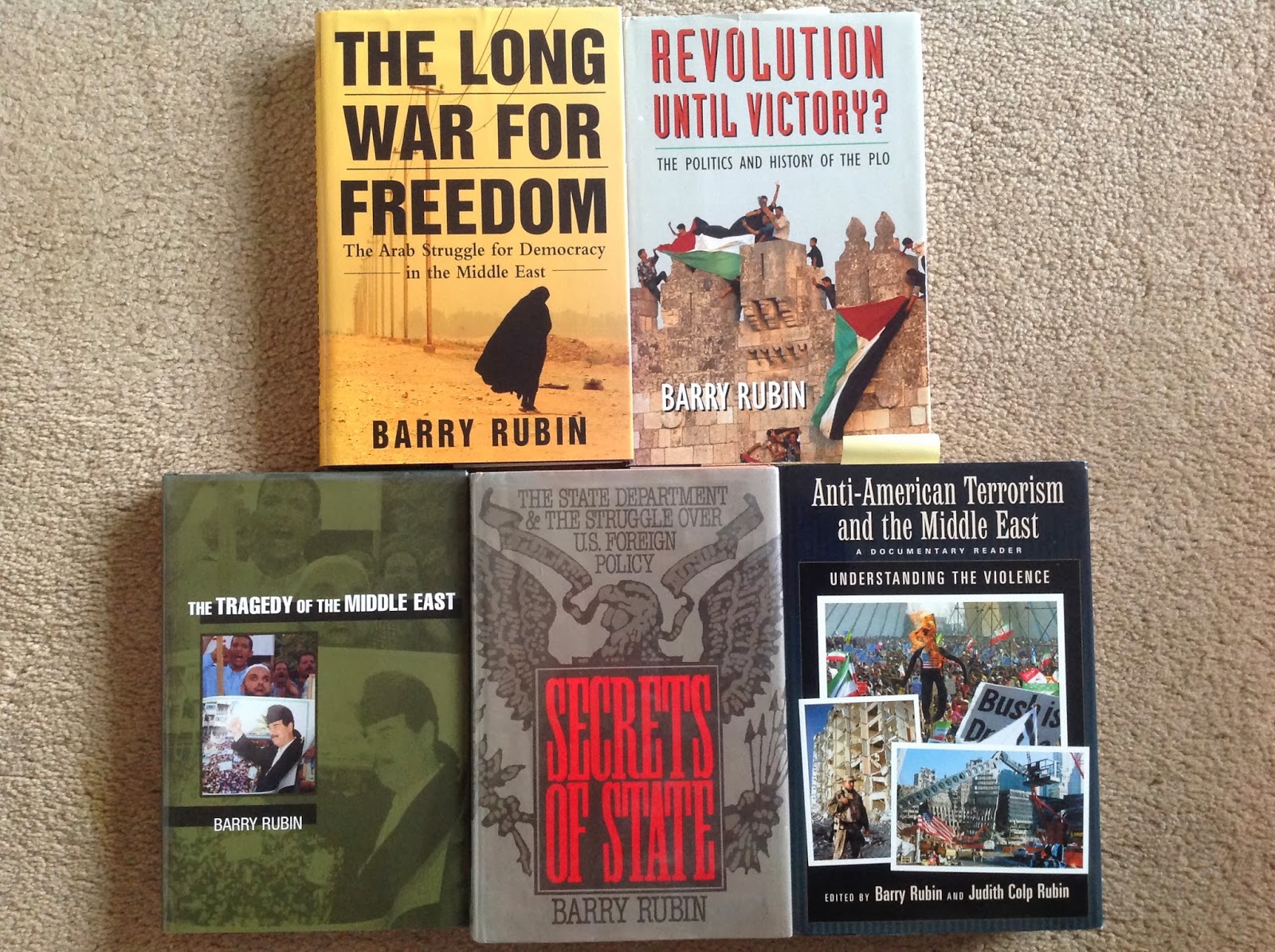 But Barry was more than writer/scholar - although dayeinu it would have been enough.

He also built institutions, founded journals, and was a pioneer in using the Internet to promulgate quality scholarship. He had regular access to established media, but embraced new media whole-heartedly.

He had a tremendous talent for explaining the vast complexities of Middle East affairs and in illuminating them he could explain and defend Israel and its actions.  In this he was indefatigable.  I remember him speaking at my synagogue, happily taking questions for over an hour.  This wasn't a tough crowd but it re-energized him to face the hostile audiences that a defender of Israel encounters and that he took on willingly and eloquently.

Every once in a while, it was a great pleasure when, in conversation, he told me, "I didn't know that" or "You've persuaded me."

That it didn't happen often reflects my comparatively paltry knowledge and reasoning skills - not any stubbornness or inflexibility on his part.

But here's the punchline, I didn't know him that well.  He took an interest in me and was generous with his time (and with my modest capabilities I did any favor for him that I could.)  But I wouldn't claim that we were that close, I was one of dozens (hundreds!) of aspiring scholars and activists he helped.

Barry Rubin was a first-rate scholar, a lion in defending Israel, and a real mensch.  He was only 64 when he died and undoubtedly had at least another dozen good books left in him (at least one book will be published posthumously).  But we must be grateful we had him with us as long as he did.

Posted by Aaron Mannes at 4:25 PM No comments: