Visit to the Postal Museum I: Echoes of Anthrax

Not so long ago, I visited the Smithsonian National Postal Museum, it was very interesting - I recommend it highly - and I'll write more about it elsewhere, but something dramatic jumped out at me during my visit.

In the exhibit on the Postal Inspection Service however, something grabbed my attention.

The Postal Inspection Service is the law enforcement agency dedicated to protecting the mail. Lots of interesting stuff happens in and through the mail. Criminals mail illicit stuff to one another, fraud is carried out through the mail. There was the Unabomber.

Anthrax
And there was the Anthrax attack. For many this is a footnote in a truly mad period of time in our nation's history. Such a terrible thing had happened just before and so much awful has happened since. The anthrax attacks don't fit neatly in the narrative, carried out by a deeply disturbed individual for motives that appear - at best - obscure. But seeing the exhibit was a sharp reminder of what a big deal it was when it occurred. 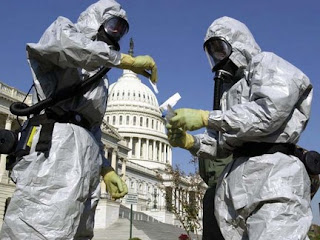 As it happened, I was on Capitol Hill that day (trying to hand out resumes and schmooze.) Since I had friends there, I brought my wife and infant son (great move in retrospect) but he was quite a hit with many of the staffers. We were fine of course, but when I got the flu a few days later it was terrifying. (I flew a United flight to LA just days before 911 and the DC sniper was all too close to my neighborhood.)

As a student of national security decision-making, the anthrax attack had a disproportionate effect on the worldview of U.S. leaders. 9/11 was - as much as anything that has ever happened - like a stunning moment out of a movie. Everyone's worldview changed very quickly and dramatically. Just weeks later, the shock remained, the wound was so very raw and open. Every conversation was still about 9/11 and suddenly yet another crazy thing - some thing out of Hollywood - happened.

AND we had NO idea who did it (it was years later, after false starts and a complex investigation, that the mystery was solved - and there are still questions.)

After 9/11 the administration vowed to not let this happen again. The term became the 1% doctrine. That is if there was a 1% chance a crazy terrorist plot could happen, we had to treat it as virtually certain. In retrospect this is a highly problematic worldview. But 9/11 itself was a 1% and it happened.

On September 10, 2001 an intelligence analyst with a strong suspicion (but not certain evidence) that four planes were going to be hijacked and flown into the World Trade Center, and Pentagon and the White House would not have been taken seriously. On 9/12 his suspicion would have received an airing at the highest levels.

Everyone was pondering what al-Qaeda would do next, what else did they have in store?

Then, there were the anthrax attacks, using a biological agent, seemingly state sponsored. Did al-Qaeda have WMD capabilities? Was it in league with a state that had such capabilities? Was some other adversary taking advantage of American weakness and disorder? Was it an effort to test U.S. capabilities or undermine our resilience? Was it carefully planted "noise" to obscure the signal of a coming attack?

All of this seemed possible.

Prior to 9/11 Vice President Cheney had run a Homeland Security Task Force, directed by his chief of staff Scooter Libby to look at the biological terror threat. They found an effectively disseminated biological attack could quickly kill tens of millions. Cheney had spent a fair amount of his career thinking about disaster scenarios.

In retrospect, the anthrax attack was noise - not signal. But it sure didn't feel that way in the White House. In retrospect, it would be great to have an independent advisor who could help parse this out. But distinguishing signal from noise is art, not science. It is always obvious in retrospect but rarely at the time when very busy people wrestle with hard problems - and after 9/11 - worry that a mistake will cost thousands of lives.

Hopefully, future students of national security decision-making will remember the anthrax attacks and draw lessons in how to interpret events around them. But history suggests they won't. When future historians write about the early 21st century, hopefully they will remember this seemingly obscure event and consider how it moved decisions and maybe history itself.
Posted by Aaron Mannes at 8:44 PM No comments: 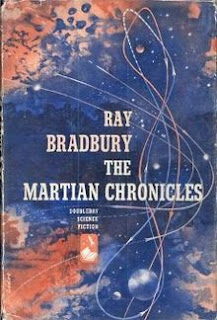 I recently listened to Ray Bradbury's haunting, elegiac classic The Martian Chronicles. In the introduction, Bradbury explained he was trying to write Winesburg, Ohio on Mars. An apt description. I can see why I didn't appreciate Bradbury as a kid. I read a little of his stuff, but he didn't grab me like Heinlein, Asimov, Orson Scott Card and many others. Not enough politics or action, too mysterious. I can begin to appreciate him now.

There were dated bits of the The Martian Chronicles. Nearly everyone is white and American, Bradbury's beloved small-town middle America moves to Mars. There are some tired tropes of henpecked or ignored housewives. But these are mere quibbles. (The fact the Bradbury was not focused on technology did not mean he couldn't "get" it with the best. The house in "There Will Come Soft Rains" basically nails the coming smart home.)

In just a few lines, without any explicit or lengthy descriptions, Bradbury evokes a vast ancient civilization. Later, when the Martians are nearly gone and humans dominate, Bradbury describes the abandoned Martian civilization as "chessboard cities." 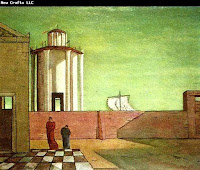 I love ruins, and vast mysterious still spaces. One of my favorite paintings is The Ideal City (which can be seen at the world renown Walters Art Museum in my beloved Baltimore and is also the source of the image on the right) and I love the metaphysical work of Giorgio de Chirico. The Martian Chronicles almost seemed like a literary accompaniment de Chirico. (I threw in an example of his work for good measure - on the left, as well as the header to the blog above).


And Columbus Day
So, it's a good book - what's The Martian Chronicles got to do with Columbus Day?

When Earthmen came to Mars, human diseases wrecked the Martians. But more than that, the Martians were telepaths. The read human thoughts which quickly those thoughts changed their world, leading to insanity for some and tearing their world apart. At the same time, once Earthmen were all over Mars, Martian ideas "infected" Earthmen as well. The telepathy was a double-edged sword.

The Europeans brought diseases for sure and a capacity for rapacity. That being said, I'm not convinced the Europeans were more bloodthirsty than anyone else, they just had a better away game. The Aztecs, to take one example were hardly pikers in the conquering business, and in some alternate history in which they acquired ships and gunpowder would they have been gentle to their European subjects? (And yet they didn't, why not?)

I'm not apologizing for the Europeans, who did terrible things. But what interests me is how - not just in the Americas - but all over the world, advanced civilizations basically folded in the face of a European onslought. Sure, the Spanairds had some technology, but the Aztec and Incan Empires were vast and sophisticated in their own right. Surely a few hundred Spanairds weren't that terrifying to emperors commanding armies of thousands along with millions of subjects.

I am also reminded of Chinua Achebe's stunning When Things Fall Apart, in which a sophisticated, pre-modern society collapses before the ideas brought by the British. (Note that Christianity quickly attracts those at the bottom of the social order, offering them a new and more expansive vision of life.)

And what of Asia, where enormous ancient empires fell before the Europeans. The European technological advantages in the 17th and 18th century (before steam power) were not great compared to the Indians and the Chinese. Yet the Brits - out of their back pocket, without really thinking it through - managed to take control of the vast Indian subcontinent.

In another time and place, long after Columbus, Saul Bellow paraphrased Elie Kedourie, "Political theory was the most devastating export of the West..."

Telepathy indeed. The Martian Chronicles are food for thought on Columbus Day.