Valerie Jarrett: Nothing New (or bad) About White House Courtiers

Five Myths about Valerie Jarrett? It makes her sound like BigFoot or Chessie (the sea monster that haunts the Chesapeake Bay, of course)? Usually this Washington Post feature is reserved for a major issue on the public agenda – like military suicides or the efficacy of sanctions. Somehow, the doings of a White House staffer are worthy of this great attention.

It started with Noam Scheiber of The New Republic who wrote a lengthy profile entitled The Obama Whisperer describing her as an all-powerful aide/alter-ego who was deeply attuned to the President’s thoughts. It was a good readable piece.

This triggered a cascade of follow-ups, one saying she is the source of all of Obama’s problems and must go. There is the counter-argument that all of this agita is due to her being a woman of color. If she were a man, her doings would be unremarkable. There were others. Finally, the U.S. Department of Journalism The Washington Post, had to set the issue straight with its Five Myths. 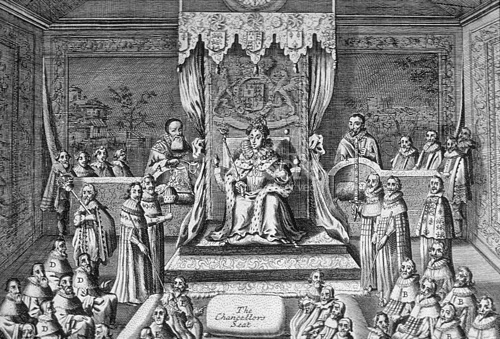 There is nothing new under the sun. Every President has a couple of close aides with whom they discuss everything. Carter had his Georgians, particularly Hamilton Jordan. Reagan had his Californians, Clinton had the Little Rock Crew, and Bush Jr. had his Texans, particularly Karl Rove and Karen Hughes. There are a lot more examples. This goes back to Andrew Jackson and his “kitchen cabinet” if not before. What exactly these aides with lofty, but often vague, titles do varies from President to President. Michael Deaver, Reagan’s deputy chief of staff, was in charge of the President’s time and mood. Reagan, as an actor, didn’t like to make trouble on the set and was very agreeable. But the demands on a President’s time are infinite, Deaver helped to make sure he wasn’t over-booked. If that sounds minor, consider, time is a President’s most valuable commodity and Deaver helped protect it and make sure it wasn’t wasted.

A little academic theory, Richard Neustadt talked about the President as an actor in bureaucratic politics in which he has to bargain and negotiate (including with his own cabinet members.) An important augmentation and counter-point to this theory is court politics. Really important people usually have a couple of close aides, a court, which serves them directly. In the words of former Kennedy White House aide Dan Fenn:

It strikes me that the need for a personal staff, a court if you will, derives precisely from the fact that leaders feel they must have some people with whom they do not have to negotiate, deal, and exchange favors.  The whole power environment within which the leader operates is dominated by that phenomenon…  More of these relationships is exactly what the leader does not want and need.  If he or she is to “enhance the capacity to rule,” to use Prof. Neustadt’s phrase, there simply has to be at least a handful of people around on whom that leader can rely.  They serve as friends, as confidants, as vessels into which anger and frustration can be safely poured.  When they operate outside the command post, the chief has to have a basic confidence that they are dealing with people and issues as he would be dealing with them if her were talking on the telephone or writing the memorandum.

Valerie Jarrett’s job is to take care of stuff to the President – including talking to him when he needs to talk. Every President has aides like that. She is  - and this is not meant pejoratively, since every President needs them – a courtier.

The central genesis for all of this talk about Jarrett is not really her. Obama has not worked out and those who placed such high hopes in him are looking for a cause. Is there a shadowy White House aide who is whispering into the President’s ear and keeping him from doing what really needs to be done (or egging him on to do what is unwise.) We went through this with Bush 43 and the persistent rumors about Cheney and Rove. I didn’t buy it then and I don’t buy it now.

There is always the idea that if the “boss only knew” what was really going on and wasn’t shielded from the real world by aides they would set things right. In politics there is usually the myth that a few tactical adjustments and the President would be doing great. People love to talk tactics, but there are big structural factors lined up against Obama. He hasn’t always played his cards well, which contributed to the big electoral defeat. But the truth is Presidents almost always get creamed in midterms and in this case the electoral map favored Republicans. More broadly, Obama faced a Republican controlled house that had few incentives to cooperate. That is the hand he was dealt. What political capital he had he spent at the beginning on Obamacare (for better or worse – history will judge). Could he have sold it better? Could he have managed various crises better? Would that have made any substantial difference? As Hemingway ends The Sun Also Rises, “Isn’t it pretty to think so?”

And that’s the final point – for all of her access, the stories about her don’t seem terribly significant. (Nothing against Ms. Jarrett who is obviously a capable and impressive person.) But I got that she clashed with Rahm Emmanuel (who didn’t?), gave the stink-eye to an important speaker, and called Donna Brazile during the Deepwater Horizon crisis. Let’s take the last issue, because it is the classic Presidential problem. All the king’s horses and all the king’s men couldn’t cap that damn oil well. Obama was little more than a spectator, but he had to look like he was doing something. So Jarrett called Brazile, a party politico with roots in NOLA. The White House looked like it was doing the kinds of things the White House is supposed to do. White House courtiers often play the biggest role not on the big things, but on the little things, because sometimes even the President can only control the little things and when the President is dealing with big things someone else needs to mind the little things.
Posted by Aaron Mannes at 11:05 PM No comments:

Yesterday Blogs of War ran the following short piece I wrote in honor of Veterans Day: 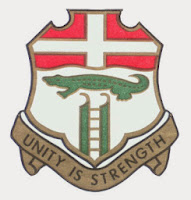 The battalion is known as "The Regulars” because in the battle of Chippewa in the War of 1812, while wearing the uniforms of American militia, they surprised the British by pressing their attack rather than collapsing. The British general supposedly yelled, “Those are Regulars, by God!”

The story may be a myth. The only witness was the 4th battalion’s commander, future President Zachary Taylor. But myths exist to show us deeper truths. Regular is synonymous with ordinary, even dull. But in this context it is high praise. It means that they were professional soldiers.

A battalion consists of 300-1000 soldiers. Coordinating several hundred people to perform complex and timely operations is no small feat. Achieving this feat under the harrowing conditions of combat is a challenge of the highest order. There must be no illusions. This is what the military does. Both the brigade commander and outgoing battalion commander stated, "The battalion's mission is to be prepared to deploy globally to kill the enemies of the United States."
To carry out these missions successfully, to be professional soldiers, to merit being “Regulars” is a mark of excellence.

In peacetime, soldiers prepare for war, practicing their craft. Hopefully, their skill will deter enemies, but history suggests otherwise.

Procedure and training guide the hand and sharpen the mind. Great business leaders cite the importance of mission in motivating people to achieve. How much more true must this be, when the business is one of dealing and suffering death?

The change of command ceremony, albeit brief, reaches deep into time to nurture this sense of mission. It is a living reminder to the unit’s soldiers of the unit’s traditions, past and honor - the sense that they are marching in a long line of history.

When the incoming and outgoing commanders reviewed the troops they were following a tradition established by Alexander the Great. At the end of the ceremony the soldiers paraded off the field, this reflected a newer innovation, from the Middle Ages. 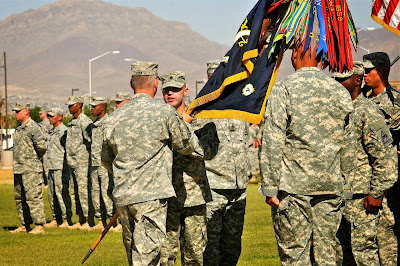 At the heart of the change of command ceremony is the “passing of the guidon,” the unit’s colors. For Roman legions, medieval knights, and musketeers a unit’s standards showed the commander’s location so soldiers could rally to their leader. Now the standards serve a less practical, but still essential purpose of symbolizing the unit's honor. The announcer explained, "The commander may die, but the colors continue."


In the modern Army, personnel move to new units at regular intervals. In a few years no one currently associated with the Regulars will still be a Regular. Yet the unit will continue. If the battalion commander is the head and the command sergeant major is the heart – the colors are the unit’s soul, the ineffably quality that makes something unique and allows excellence.

Allow me to add a few personal notes. I met Bill (Lt. Col. Adler) and his wife Alice as an undergraduate at Emerson College over twenty years ago. They are just fantastic people. One tiny example, as I was driving to the Change of Command Ceremony, I received a text from Alice, making sure I was ok and wasn't having a problem getting there. She was on point for one of the biggest moments of her husband's professional life (and which is a pretty big deal for her too). She had people and an reception to organize. But she found time to check in on me! I'm pretty sure I would have forgotten me under those circumstances, but I'm not Alice.

At the party that night, I was treated like a visiting celebrity - even though the day was about Bill.

Bill, a thoughtful, smart guy, is achieving his life's dream. Commanding a battalion is the sweet spot. It is the highest level of command where you are still in touch with the troops and personnally engaged in the action. He wanted to be Army when we were in undergrad when the rest of us wanted to be directors, radio DJs, and stand-up comedians. For most of us, dreams collided with reality and came out worse for wear. But Bill made it!

Finally, the picture above is from Reyes Photography, but Alice Adler is a terrific photographer.
Posted by Aaron Mannes at 11:40 PM No comments: