Ninety years ago today, Teddy Roosevelt died at his home in Oyster Bay. He was sixty. Besides the grim reaper, there were few forces that could contain TR's energy. As VP he came face to face with two of them.

Theodore Rex did many tremendous things in his fascinating life. He authored dozens of books, was a war hero in the Spanish-American War, governor of New York, and he was an able President who won the Nobel Peace Prize while in office (for negotiating the end of the Russo-Japanese War). With all of this on his resume, it is easy to forget that he was also vice president. He didn't really want to be, he had said,

I would a great deal rather be anything, say professor of history, than Vice-President.

Still, Roosevelt took the job figuring it would set him up for the Presidency (his plans came to fruition early when President McKinley was assassinated in September 1901.) But the Vice Presidency, boring to most politicians, was absolutely painful to a man of Teddy Roosevelt's energies. So he took a vacation during which, according to the Senate Historical Office's invaluable Vice Presidents of the United States, 1789-1993:

The lack of pressing business as vice president allowed Theodore to spend time playing football with his sons and sparring with his tempestuous older daughter, Alice.

It is unclear if these were verbal jousts or actual fisticuffs Teddy would have preferred the latter, especially since Alice became Alice Roosevelt Longworth, the Washington society figure who famously said,

If you haven't got anything nice to say about anybody, come sit next to me.

Alice clearly had her father's number, once remarking

My father always wanted to be the corpse at every funeral, the bride at every wedding and the baby at every christening.

When he became President, TR stated,

I can be President of the United States, or I can attend to Alice. I can't do both.

Fathers of daughters, from King Lear to the present can no doubt relate. 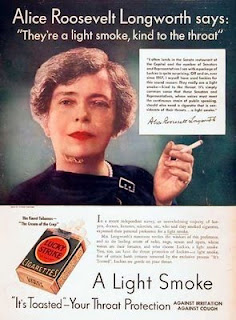 Email ThisBlogThis!Share to TwitterShare to FacebookShare to Pinterest
Labels: VeepCritique

TR was one of my favorites, in fact, I have a large stack of his books and several biographies that I've read many times. It was funny that the Republican strategy was to make him Vice President in an attempt to kill him politically. The failings of this plan was prophesized by a fellow politician who couldn't believe that the party would place this man one death away from the Presidency.

Great to hear from you.

It was Mark Hanna, the Karl Rove of his time and a top McKinley ally (interestingly Rove really admires McKinley). He tried to block Roosevelt (in a break with the Rove comparison - Hanna opposed the Spanish-American War). He said, "Don't any of you realize there is only one life between that madman and the presidency?"

And after McKinley was assassinated, he said, "Now that damn cowboy is president."